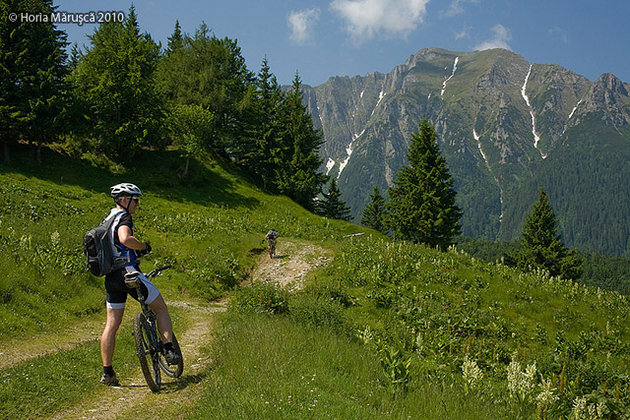 One year after spending a ski-touring week in the Bucegi and Făgăraş, Mario kept his promise of returning to the Romanian mountains. Together with five friends from Switzerland and Italy, this time he came for six days of pedaling on the dirt roads and trails of the mountains near the city of Braşov.

Combining my long experience in organizing tours for mountaineers from all over the world with Horia’s comprehensive knowledge of the mountain biking routes around Braşov, we put together a complex and fulfilling program for our guests. They cycled across the Baiului ridge, along the Bucegi and Piatra Craiului massifs, on the hills, pastures, and villages near the famous Bran Castle, through the magnificent gorges of Zărneşti and Dâmbovicioara, in the majestic forests covering the Postăvaru mountain on the outskirts of Braşov, totaling more than 6000 meters uphill and more than 200 kilometers distance. The weather was generally good, we only had to change the route on one day – switching from going up to the 2000 meters of the Bucegi plateau, to a simpler but playful route in the forests surrounding Predeal.

There was also time for visiting the famous Bran Castle – people keep going there to find Dracula and end up fascinated by the charm of the old summer residence of Queen Mary of Romania. The group also visited the old sparkling wine factory in Azuga and, not in the least, enjoyed delightfully quiet evenings and gargantuan home made dinners and breakfasts at Madam Jebac’s pension at the footsteps of Bucegi mountains. The last two evenings in the lively and cheerful city center of Braşov were like a return from a trip into a different world, one where you forget about all your daily issues.

Enjoy the photos Horia took during this trip.

Dear Iulian,
as always your tours look wonderful and like so much fun!!! I have been in the mountains in Salzburg/Austria (Untersberg), which was lovely, too.

Hope you stay well and will continue giving these great tours! Thanks for sharing your experiences with us!

This site uses Akismet to reduce spam. Learn how your comment data is processed.

Hi Iulian, Back in Australia now after my European sojourn and a bit sadden to read th… (>>>)

We were visiting Romania with work, and bringing customers with us we wanted to do so… (>>>)

We are 4 Israeli Bikers who have been on two previous European Bike Trips. We have bee… (>>>)

For all the mountain lovers from everywhere in the world: you can trust Iulian and hi… (>>>)